the king of threadneedle street 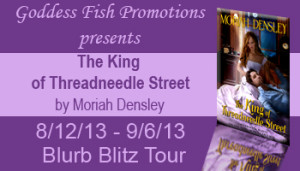 Today we are welcoming Moriah Densley to the blog! She is here to share some information about her book, The King of Threadneedle Street and also to give away a prize. Moriah will be awarding a genuine Victorian-style pearl jewelry set inspired by the book, including necklace, bracelet, and earrings to a randomly drawn commenter during the tour. To be entered into the giveaway, enter the Rafflecopter below.

To find more blogs to leave comments on, click HERE. 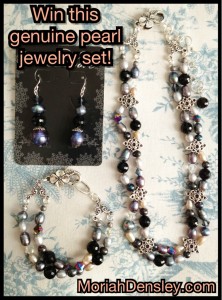 THE KING OF THREADNEEDLE STREET 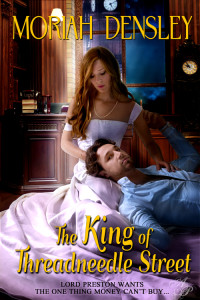 He owns three shipping companies, a diamond mine, and his own castle.
He knows Portuguese, Hindu, Mandarin and Morse code.
His assets net thirteen million.

Andrew Tilmore, Lord Preston, the financial prodigy dubbed “The King of Threadneedle Street” wants the one prize out of reach: his childhood sweetheart. The papers can waste a sea of ink scandalizing over his lavender-eyed Alysia; so what if she is the daughter of his father’s mistress?

Alysia Villier learned the craft of the courtesan from her infamous mother―by osmosis apparently. A gifted artist who almost won the Prix de Rome, Alysia is not interested in following in her mother’s footsteps, since Andrew ruined her for any other man. But with her legal guardian—Andrew’s father―in control of her inheritance, she has little choice in the matter.

Keeping Alysia out of trouble and away from eager suitors becomes a cross-continental quest for Andrew. Not his old-fashioned family, the disapproval of the ton, nor even Alysia’s dedication to duty and propriety will stop him. Playing newspapers and investors like pawns, tumbling world markets, inciting riots… has he gone too far?

“Not affected by heroic nudity”

Making Alysia a semi-famous Expressionist painter was a joy. I took art lessons the year I wrote this manuscript, which helped me write from the perspective of an artist who sees light, color, and shape as possibilities instead of facts. There’s a scene wherein Alysia claims not to be affected by “heroic nudity” in art, and Andrew calls her bluff. You’d better believe that was fun to write!

Andrew held out a finger to trace the lines of her drawing, but withdrew. “The Dying Gaul?” He turned his discerning gaze on her.

“One of my favorites. He reminds me of you,” she confessed. The heat of his stare was too intense; she diverted her eyes to the case of pastels in her hand.

“But I have no moustache.” Playful, but she knew he was trying to draw her out.

“The resemblance is in his form and his masculine expression.”

“But not in despair. He is brave. He meets his fate proudly.”

His eyes gleamed with mischief. “He is naked. Surely you don’t imagine me that way.”

His eyebrows raised into his tumbled hair.

She took her book back and looked again at the drawings he found so disturbing. Admittedly, from the perspective of an objective viewer, there was indeed a great deal of emphasis on suffering.

Alysia noticed Andrew was removing his clothes. He often shed his jacket, waistcoat, and necktie in her presence, but he now had his shirt off and was unfastening his trouser buttons.

“Andrew! What are you doing?”

“You said you wanted to sketch me?” He held his arms out. “I want to be sketched. No better time than now.”

He shut the door of the salon. The turning lock echoed, a sinister sound.

“Oh, it will be better than decent.” He tossed his boots and stockings into a chair.

“I mean, presentable. To the public.” She watched with wide eyes as Andrew wadded his trousers and launched them into the chair as well.

“You said you aren’t averse to heroic nudity.”

“But not yours!” She felt on the verge of panic. “Besides, what is heroic about this?”

“You are the artist with the vivid imagination. Make something up.”

He tossed his drawers into her lap, and a whimper squeaked from her throat. She heard him drop onto the settee opposite her.

Alysia reined in the giddy feeling making her lightheaded and opened the book to a blank page. She selected a pencil then looked up at him. 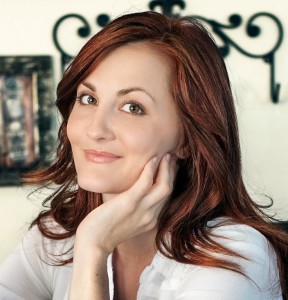 Moriah Densley sees nothing odd at all about keeping both a violin case and a range bag stuffed with pistols in the back seat of her car. They hold up the stack of books in the middle, of course. She enjoys writing about Victorians, assassins, and geeks. Her muses are summoned by the smell of chocolate, usually at odd hours of the night. By day her alter ego is your friendly neighborhood music teacher. She lives in Las Vegas with her husband and four children. Published in historical and paranormal romance, Moriah has a Master’s degree in music, is a 2012 RWA Golden Heart finalist, 2012 National Reader’s Choice Award “Best First Book” finalist, and 2012 National Reader’s Choice Award finalist in historical romance. She loves hearing from readers!

The King of Threadneedle Street is available: