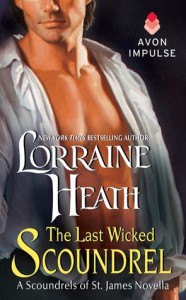 William Graves is the last of Feagan’s scoundrels. A one-time grave robber turned royal physician, he has devoted his life to saving others, because he knows there is no way to save himself. Especially not around a lady such as Winnie. Though underserving of her touch, he cannot resist, his passion cannot be tamed…even in the face of certain danger.

Winnie, the Duchess of Avendale, never knew peace until her brutal husband died. With William she’s discovered burning desire—and the healing power of love. But now confronted by the past she thought she’d left behind, Winnie must face her fears…or risk losing the one man who can fulfill all her dreams.

Why you need to read this book. I LOVE William. This book put a perfect end to a wonderful series that I loved! William survived a horrendous childhood to become a doctor with the help of his friends. He is one of the queen’s doctors and has fallen in love with a duchess. True love wins in the end. Bring some kleenex to the reading of this wonderful book!

The Last Wicked Scoundrel is available at Amazon

“I don’t want you to be afraid, Winnie.” He cursed himself for the ease with which her name rolled off his tongue.

You should be, he thought. God help her, but she should be. Whatever reservoir of control he possessed dissipated.

With a harsh curse echoing between them, he lowered his mouth to hers. Her lips were as plump and soft as he’d always imagined, parting slightly, hesitantly, inviting him to take further liberties. And he was scoundrel enough to accept the invitation.

She moaned as he swept his tongue through her sweet mouth. She tasted of champagne, and he wondered if she were at ease with him because she’d had a few glasses too many. Then his wondering turned to wonder as her tongue explored his mouth with equal fervor. The advantage to being with a widow. She wasn’t innocent. God, he knew she was far from that. She clutched the lapels of his jacket. Closing his arms around her, he brought her in closer to him, until her body was pressed against his. He could feel her curves, her dips and swells. He cursed the clothes separating them.

Her nails scraped his scalp just before her fingers trailed along his jaw. Sighing, she wound her arms around his neck, bringing herself even nearer.

For three years now, he had dreamed of this moment, fantasized about it, envisioned it, but had never dared believe he would ever possess it. He didn’t want to give it up, didn’t want to stop. He delved deeper, unleashing the hunger he’d held in check—for her, only for her.

She deserved someone far better than he, someone who didn’t lie, who didn’t hold secrets, who could sit with her before a fire and never fear being honest. But with her, he would always have to watch his words, always take care in what he revealed. She had said she wasn’t afraid of him, but he knew that if she understood exactly what he was capable of doing she would be terrified. She wouldn’t trust him. He doubted that she would like him; she most certainly would not love him.

Even kissing her had the possibility of leading to disaster—and he wasn’t the only one whose life might be ruined. He should pull back now. And he would.

After one more moment.

He wanted to undo fastenings. He wanted to lift her into his arms and carry her to her bedchamber. He wanted to do all the things he shouldn’t. But indulgences came with a price, and he couldn’t in all good conscience ask her to pay it.