the making of a duchess

Welcome to Sugarbeat’s Book Nook – The Home of the Romance Novel!

The Making of a Duchess by Shana Galen

Source: I purchased a copy of this book to read and review 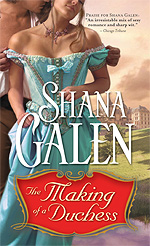 Twelve years after fleeing their burning chateau, Julien Harcourt, Duc de Valère, searches for his lost twin brothers. His frequent travels between England and France at a time when the exiled Napoleon is reported to be marshalling his troops raises the suspicions of English authorities who set secret operative Sarah Smith on his trail. A risky game of cat and mouse leads the two from the ballrooms of London to the prisons of Paris and into a fragile love that neither dares to hope for.

The first in a trilogy of three brothers struggling to reconnect and restore their noble heritage in the aftermath of the French Revolution, each losing his heart along the way.

Welcome to the first book in Shana Galen’s next series – The Sons of the Revolution.  This series is about three brothers who were separated one horrible night when the common people of their village attacked and burned their home.  The boys from oldest to youngest are Julien, Armand and Bastien.  I unwittingly read Bastien’s story first and am now backtracking and reading the first two books in this series.

Julien Harcourt is now the Duc de Valere as his father was killed by Madame Guillotine.  He escaped his burning home with barely the clothes on his back and his mother.  He and his mother went to England where her family was from.  They were taken in and cared for in their time of need.  Julien couldn’t find either of his brothers before he escaped and has spent the majority of his life searching for them.  To further his search for his brothers he has made several secret trips into France.  These trips did not escape the notice of everyone and he is now being investigated for treason.

Sarah Smith is a governess of the children of Sir Northrop until he bullies her into impersonating the daughter of a French emigree family in order to investigate Julien.  She is to search his house and gather the necessary documents for him to be tried and convicted.  After being off to a rocky start, Sarah becomes more and more convinced that there is more to this than it appears, and that Julien isn’t guilty.  I’ll leave the rest of the story for you to read!

To admit a bias right up front – I love Shana Galen’s stories.  I find that she captivates her audience, draws them into the story quite quickly and the holds on to them for the duration.  The characters are incredibly well developed and have qualities that draw us to them.  We may love them or hate them, but they draw emotion out of us!  We want the villains to die a painful death; we want a happily ever after, regardless of how hard the characters need to work for it!

This book starts during the French Revolution – my least favorite of all the english historical time periods.  I guess I don’t like the reminder of that bloody time in history!  I often find myself avoiding books that touch on the Revolution, but this one was different.  It was written as a “rising from the ashes” of revolution.  It was a positive story, not really dwelling on the misery of that time.

As this book focuses on finding brother Armand, I am apprehensive about reading his story.  You will understand that comment when you read this book.  Stay tuned, however as it’s loaded onto my nook, and I’m ready to start.  I certainly can’t not read the middle book of this series!

A moment later, the duchesse was gone, and Sarah was alone in the ornate drawing room. She turned this way and that, afraid to touch anything. Oh, how she hated all of this lying and playacting! But the faster she completed this mission, the sooner she could return to life as a governess. Perhaps she could find the evidence Sir Northrop wanted now, and then she would be able to tuck Anne and Edmund into bed tonight.

With new purpose, she moved about the room, looking for a desk or table with a drawer—anything that would hold or conceal papers. She passed a large painting of an Italian noblewoman and then halted and whipped back around. Was that a—no.

She leaned closer. Was that a Titian?

Oh, Lord. Oh, my. Just how wealthy was this family? An actual Titian! And then another thought occurred to her—with wealth came power. What would happen if the Valères discovered she was not who she claimed? Would she be thrown in prison?

Even worse, what if the Duc de Valère was a spy? If he realized she had found him out, he might see the need to be rid of her. Permanently.

She put a hand to her belly to still its roiling. She could not worry about that right now. She had to keep her chin up and her wits about her. She tried focusing on the Titian.

She wished she could put her spectacles on in order to read the signature, but The Widow had forbid her to do so unless absolutely necessary. So Sarah squinted and leaned in close, lifting one hand toward what looked like a scribble.

“I wouldn’t touch that if you want to keep my mother’s favor,” a deep voice said from behind her.

Sarah swung around, knocking a bowl off a nearby side table. It shattered loudly when it hit the gleaming wood floor.

“Oh!” She looked from the shattered bowl to the man standing in the drawing room’s entrance.

It was him. She knew it.

This was the Duc de Valère. The spy. The traitor. The man who might kill her if he knew what she had been sent to do.

Her stomach clenched again, and grabbing the vase nearest her, she promptly cast up her accounts.

The Making of a Duchess is available on Amazon