On New Year’s Eve, she tumbles 700 years back in time–and into the bed of a darkly dangerous knight. 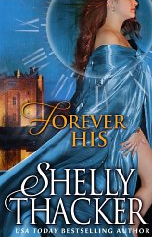 Sir Gaston de Varennes wanted a docile bride who would fit into his plans for vengeance and justice, but a trick of time finds him married to a thoroughly modern American lady who turns his castle, his life, and his heart upside down. Will her desperate secret tear them apart after only a few bittersweet weeks of stolen passion–or will they conquer mistrust, treachery, and time itself to discover a love that spans the centuries?

Winner of the National Readers Choice Award: Best Historical Romance of the Year

“Irresistible, right down to the surprise at the end… One of the best romances of the year.” –The Detroit Free Press

“A Desert Isle Keeper. Touching, ingenious… I love this book. I’ve read it time after time, and even if I haven’t waited quite long enough between readings to forget all the details, I always get drawn back into the story so intensely that I can’t put it down. Grade: A (highest rating).” -AllAboutRomance.com

“Moving, riveting, magical. Forever His is destined to become an all-time favorite in medieval and time-travel romances.” -The Medieval Chronicle

A full-length novel of 125,000 words
Originally published by Avon Books
This Author’s Preferred Edition ebook includes bonus content: “The Making of Forever His: The Story Behind the Story.”

The Stolen Brides Series: One falls through time and finds herself married to a dark stranger… one may never reach her royal wedding if she can’t resist her rugged protector… one is abducted by a mysterious swordsman and swept away to a secret island paradise. Three regal brides are about to discover that falling in love with a warrior is the most dangerous adventure of all.

Why do you need to read this book? Although this is a historical romance, it is beautifully crafted time travel story. I’m a sucker for Time Travel, and this is the best that I’ve read in quite a while.

Forever His is available on Amazon

Welcome to my world!
‘Tis the season to be jolly-but Boston antiques dealer Claire MacGregor isn’t looking forward to a solo Christmas, or cocoa for one, or trimming the tree by herself.  But company’s coming.  Claire is fooling around with an old puzzle box and when it opens….a gorgeous, studly laird appears.  Thumbs down: Sir Cameron MacLeod is centuries old.  Thumbs up: he doesn’t look it.  And Cameron is tall, dark and lust – very lusty.

Come away to mine.
Who is this lovely lass?  And where is he?  Before awakening in the 21st century in Claire’s bedroom, the last thing Sir Cameron MacLeod remembers was readying for war with a rival clan.  Despite her strange clothes and odd ways, Claire is bonny and brave.  He’s about to find out that love is a many splendored thing indeed…

This book was purchased as part of my requirements of the Holiday Challenges that I have entered.  Again, something about a mostly naked man – in a kilt – on the front cover was a guarantee that I would pick this one up 🙂

This book is set in two time periods.  The first time period is that of Cameron’s life in Scotland in 1745 just before the massacre at Culloden.  The second is present day Boston.  Sir Cameron’s aunt is determined to protect him from what she forsees will happen at Culloden.  When he refuses to back down from that fight, she puts a spell on him  and confines his essence to a puzzle box which is then passed down from family member to family member through the ages.  The last member of Sir Cameron’s family dies without children and wills Claire all his possessions and the last of his money.

Claire is an antique dealer, barely eeking out a living with her store.  It’s the week before Christmas and she receives a phone call from a lawyer to let her know that her friend, Tavish MacLean,  has passed away and that she has inherited,  just as a truck is pulling up to the back of her store to deliver all her friend’s worldly belongings.  In the absence of customers that snowy night, Claire finds and fiddles with a puzzle box. She finally opens it while reciting the words on the scroll that comes with it. Poof….a mostly naked highlander appears!

Sir Cameron is confused and combative upon appearing in the 21st century.  He runs off in anger several times resulting in several run-ins with the police.  The modern day police’s response to Cam’s 1700s combative behavior is realistic as well as humorous.  His puzzlement about normal 21st century things and situations is well written and appropriate.

This book is delightful.  I am quite fond of men in kilts, and of time-travel romances.  I think it’s always interesting to see what the author does with two people from different times, which time they end up living in (once they fall in love, of course) and how they adapt to that time period.  I like it when the author provides realistic solutions to real problems, such as identification for a person transported to the 21st century.  I feel that the author has created a realistic story.  All of the various details were taken care of in a logical fashion.  Although I have heard complaints about the pacing of the story, I don’t agree with the concerns.  I felt the story was well paced.  The relationship between Cameron and Claire was wonderful.  There was strong chemistry between them and the romance proceeded well.  The author took time to allow Cameron to come to terms with what had happened to him and for both Cam and  Claire to adjust their lives for the possibility of a realistic romance to take place.  Cameron and Claire had plenty of heat between them causing them to steam up the windows.  They had plenty of controversy, yet tons of humor.  At one point Cameron comes to the conclusion that Americans use male deer as currency (bucks) and head off to the zoo to get him some “bucks”.  What resulted was hysterical!

This was a touching and realistic time travel romance, with a Christmas theme.  Perfect read for a holiday reading challenge!

RT Reviews give this book 4 out of 5 stars and had the following to say: “Blair pens another delightful, entertaining winner with lots of action and humor. An 18th-century Highlander meets a 21st-century antique dealer who brings him back to life with passionate results.”

For more information on this author and other books she has written, check out her website.