to love a thief 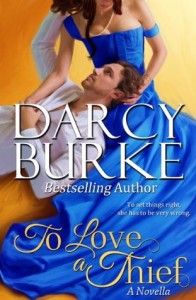 To set things right, she has to be very wrong…Former constable Daniel Carlyle hasn’t the foggiest notion how to be a viscount. No one is more shocked than he when his father’s second cousin and his son die on the same day. When a prominent earl offers to guide Daniel through Society and the House of Lords, he’s grateful to have a champion. Things seem to be falling into place when he meets a lovely young woman he intends to make his viscountess. Until he catches her stealing from his mentor.The moment Jocelyn Renwick glimpses her family’s stolen heirlooms in the possession of a wealthy earl, she demands their return. He dismissively insists they’ve been in his family for generations, and she privately vows to get them back at any cost. But the law-abiding Lord Carlyle foils her plans, and she reluctantly partners with him to solve the theft of her property. When they discover the earl is up to his ears in criminal acts, he threatens to link Daniel to his gang of thieves. Jocelyn must decide if justice for her family is worth risking a chance at love.

To Love a Thief is available on Amazon

Daniel reached Aldridge’s office and went inside. What greeted him made him stop in his tracks. “Miss Renwick?”

She stopped, her hand on the desk drawer she’d just closed. She stood straight and smoothed her skirt. Dots of pink colored her cheeks. She would have looked alluring if she hadn’t also looked guilty. “Good evening, my lord. I do believe I’m in the wrong room.”

Wishing to conduct his interview in private—and he intended to conduct an interview as the constable in him roared to the surface—he closed the door behind him. “What are you looking for in Lord Aldridge’s office?”

“Nothing. As I said, I’m in the wrong place. I was looking for the retiring room.” She moved around the desk and made for the door.

Daniel stepped into her path. “You thought the retiring room might be contained in the desk drawer?”

The pink in her cheeks darkened and spread. “Of course not. If you’ll excuse me.” She made to move past him, but he placed his hand on her forearm.

“I will not. At least not until you tell me what you were doing. You can’t expect me to believe you were simply in the wrong room. You were looking for something. Tell me what it was.”

She moved away from him as if his touch burned her. Maybe it did. The feel of her skin beneath his palm was enough to heat him in the most inappropriate places.

“Please, my lord. I was mistaken. Just let me go.” Then she dashed for the exit.

Daniel went after her, but she’d already opened the door and was stepping into the corridor. He stopped short lest he tackle her over the threshold, but then she spun on her heel and charged right back into him, sending him stumbling backward. She gained her balance, turned, and shut the door firmly.

Daniel lurched forward and, without thinking, pinned her against the door. He laid his palms on either side of her shoulders against the wood. “What the devil is going on?”

“Keep your voice down,” she hissed. “Someone is in the corridor.”

That’s why she’d come right back into the office. He didn’t move away from her. Instead, he enjoyed the heat of her body, the flush of her exertion, the shallow pant of her breath. She kept her eyes averted, but Daniel would get her to look at him soon enough.

“Unless you want me to open this door and let all and sundry see us together, you’ll tell me what the hell you were doing in Lord Aldridge’s office.”

Her eyes snapped to his, their hazel depths flashing. She said, “You wouldn’t,” but her tone was laced with doubt.

He watched the muscle in her throat work as her pulse sped beneath her flesh, and her chest heaved. “You don’t know me well enough to say for sure. Do you want to find out?”