To Steal a Highlander's Heart 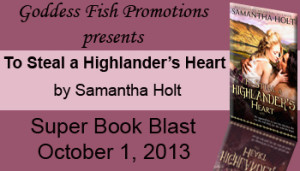 Today we are welcoming Samantha Holt to the blog. She is the author of To Steal a Highlander’s Heart and is here to share about her book, and also to giveaway:  a $50 Amazon gift card to a one randomly drawn commenter. To increase your chance of winning, click here to find a list of other blogs you can comment on!

TO STEAL A HIGHLANDER’S HEART 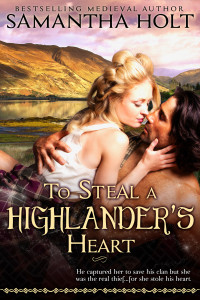 Alana sets eyes on Morgann for the first time in several years and what does he do? He captures her! But Alana refuses to go meekly with the sexy Highland warrior. Her kidnapping will reignite the rift that’s existed between the two clans since her father accused Morgann of theft and she doesn’t want to see her father harmed in the inevitable war that will ensue.

Unfortunately for Alana, the faeries seek to interfere with her plans to escape. The sidhe have a debt to repay and Tèile, the green faery, is determined to mend the rift between the clans for good. And that means ensuring Alana and Morgann marry.

Morgann has his own reasons for taking Alana and they are nothing to do with marriage or war. He wants to use her to reveal a secret from the past, the one that had him accused of theft. If only he didn’t find his childhood friend so attractive. When circumstances force them together, Alana’s life is threatened and war is imminent. Can Morgann reveal the truth without losing Alana? And will the faeries meddling help or hinder his cause?

“‘Tis something I have to do. I cannae explain my motives but ‘tis nae for something as petty as revenge, I promise ye.”

Shaking her head, she inched closer. “I donnae see why ye cannae explain. Ye used to tell me everything, remember?”

Hand thrust out, he pressed it to her shoulder in an attempt to hold her back. She could hardly think when she got closer but the heat of his body seemed to suck her in. They were speaking in riddles. Dancing around one another. Both trying to understand what the other wanted. She’d intended to manipulate him. To bargain her freedom, yet somewhere along the line the past had caught up with her and the burning desire to understand what had happened all those years ago snared her.

And then another kind of desire swept her up.

Alana curled her fingers around his wrist and drew his hand away from her shoulder. She glanced down at his arm and paused. Bringing her other hand up, she gently rolled up his sleeve, fingertips skimming over his skin.

“What did ye not tell me then?”

His throat worked as he swallowed and Morgann shook his head. “I’d hardly tell ye now.”

“Ye are a stubborn man, Morgann MacRae.” Her fingers settled on the scar on his arm, tracing the shape of it—a brand in the shape of a dagger tip. She winced as she considered the pain he must have felt. 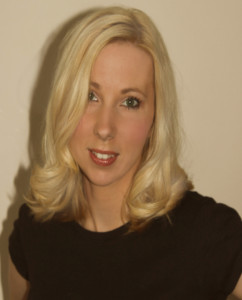 Samantha resides in Warwickshire, England with her twin girls and husband. She’s a romance addict and has been devouring all kinds of romance for as long as she can remember.

Having studied archaeology, Samantha likes to blend her love of the past with her passion for romance to create thrilling and passionate tales set to medieval backdrops. She thinks there’s nothing sexier than a rugged warrior and a feisty maiden falling head over heels for each other.