when you give a duke a diamond 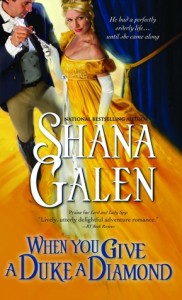 When you give a duke a diamond by Shana Galen

He had a perfectly orderly life…

William, the sixth Duke of Pelham, enjoys his punctual, securely structured life. Orderly and predictable—that’s the way he likes it. But he’s in the public eye, and the scandal sheets will make up anything to sell papers. When the gossip papers link him to Juliette, one of the most beautiful and celebrated courtesans in London, chaos doesn’t begin to describe what happens next…

Until she came along…

Juliette is nicknamed the Duchess of Dalliance and has the cream of the nobility at her beck and call. It’s disruptive to have the duke who is the biggest catch on the Marriage Mart scaring her other suitors away. Then she discovers William’s darkest secret and decides what he needs in his life is the kind of excitement only she can provide…

To start with, it was created by Shana Galen, one of my favorite authors, but more than than, the character of Juliette is outstanding. She is strong and takes what she has and makes a life for herself – a tough thing to do in Regency England. She plans and she succeeds. I love this character! The duke is cute, but Juliette steals the show in my opinion.

When You Give a Duke a Diamond is available on Amazon

Now she wanted to sleep. She should not have stayed out so late, but the play had been witty, Vauxhall Gardens filled with the most entertaining men and women in London, and before she had realized, it was nearly morning. Rosie would have a difficult task ahead of her if Juliette was to look stunning at Carlton House tonight.

“Yes, Hollows, do rouse Mary and send her to my chamber.” Juliette felt badly about waking the girl—she, Hollows, and Cook were the only servants not given the night off—but Juliette did not relish sleeping in her stays and gown, and she could not get them off by herself. Once she was undressed, she would send Mary back to bed and finish her toilette on her own.

Juliette started up the steps. “Off to bed with you, Hollows,” she said over her shoulder. “I shan’t need you for several hours.”

Juliette’s feet felt like cannonballs—not that she had ever touched a cannonball—but she imagined they were impossibly heavy. Why had she agreed to so many dances? No, she had never been good at denying herself pleasure when it was to be had, and tonight the music had been lively, the gentlemen agreeable, and her spirits high. She could have danced until noon.

Thank God she hadn’t. One day she would learn to think of the consequences before she acted.

She stepped onto the first floor landing and started for the stairs to the second floor, where her bedchamber was located. The doors to the drawing room were closed, but Juliette paused when she heard a sound from within. She stopped, pressed her ear to the doors, and listened.

She shook her head. She was so tired, her mind was deceiving her.

She started for the steps again and heard an unmistakable thump. Whirling, she did not hesitate but ran straight to the banister. “Hollows!” Her heart hammered in her chest. “Hollows! C—”

A hand clamped over her mouth, and she was propelled backward, losing one slipper as she was dragged.

He had come for her, as he’d vowed he would. She’d grown complacent, dismissing her additional footmen for the night. How could she have been so foolish? Now he would kill her. Hollows, who was rather hard of hearing, would never even hear her scream.

Juliette kicked and clawed, but she couldn’t escape. The man—she assumed it was a man because the hands were so large—had grasped her about the waist to haul her back more quickly. His hand on her mouth tightened and began to cut off her air. She tried to gasp in a breath as the drawing room doors slammed, and a man she did not know stepped before them.

She blinked and swallowed, still trying to catch her breath.

The man dressed stylishly in black. His hair was the color of midnight with a streak as white as the pearls at her throat. He smiled at her, but his eyes were dark and menacing. Juliette thought perhaps she might reserve her thanks a few more moments.

“I’d like to have a brief chat,” the man said. “Gabriel, she’s turning purple. Do lift your hand. You won’t scream, will you, Duchess?”

She shook her head, having every intention of screaming as soon as this Gabriel removed his paw from her mouth. Even if Hollows didn’t hear, the cook or Mary might.

“Good because if you do, you won’t like the consequences—for you and whoever comes to your aid.”

Gabriel removed his hand, and Juliette kept her mouth clamped shut. Something about the man in black made her believe he could make her very sorry indeed if she did not do as he bid. She had been made very sorry before for disobedience and, subsequently, had become quite good at doing as she was told. For a decade she had been her own independent woman, but now she felt seventeen again. All her survival instincts resurfaced.

She stepped away from the man called Gabriel and cut her eyes to take in the room. The usually stylish, immaculate room was in complete shambles. The expensive drapes had been ripped to ribbons, the newly upholstered chair cushions spilled their filling, antique lamps were overturned, and the heavy drawers scattered their contents on the rug.

Escape was her only salvation. She had to find a means to escape. But she couldn’t allow these men to know she was afraid or planned to run. The punishment would come faster then.

“Looking for something?” she croaked.

The man in black smiled again, and this time it almost reached his obsidian-colored eyes. “Very perceptive, Duchess. May I call you Duchess?” He moved smoothly to a toppled chair, righted it, and sat as though he was perfectly at ease. As though this were his home, not hers.

Juliette bristled, but she was too adept at hiding her emotions to show it. The Countess of Sinclair had taught her well.

“I prefer Mrs. Clifton,” she said, though no one had called her that in years. Oliver had used that name, and she’d come to hate it. But it seemed appropriate at this moment.

“Why don’t I call you Juliette? It seems fitting as we are going to be good friends, Juliette.”

Her throat tightened. She had to get out of here. “And what should I call you?” she asked coolly.

“Lucifer, of course. Do you know what I want to discuss, Juliette?”

She shook her head. Dear God, she prayed he wasn’t going to rape her. Her mind was racing, trying to place him. But he wasn’t familiar to her at all. She didn’t think she could have spurned him. She would have remembered, and she was always gentle with those whose attentions she rejected.

Could Oliver have sent him?

No, her former husband liked to do his own work. “Actually, I don’t know what you wish to discuss, Lucifer,” Juliette replied with strained politeness. “I’m afraid you have me at a disadvantage.”

“Oh, come, come. We are friends. We can be honest with one another.”

She shook her head, cutting her gaze to the drawing room doors. If she ran, could she make it in time? Even as the thought occurred to her, Gabriel—large and blond—stepped in front of the doors and crossed his arms.

“I am being honest with you,” she said to Lucifer, panic rising in her throat now. “I don’t know you.” But even as she spoke she could see he didn’t believe her. She could see she was doomed.

Lucifer raised a brow. “But I know you, and I know you have something of mine. Now, are you going to tell me about the diamonds, or am I going to have to find more creative methods of loosening your tongue?”