when you give a rake a ruby

If You Give  A Rake a Ruby by Shana Galen 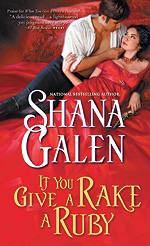 Blurb: Her Mysterious Past is the Best Revenge . . .

Fallon, the Marchioness of Mystery, is a celebrated courtesan with her finger on the pulse of high society. She’s adored by men, hated by their wives. No one knows anything about her past, and she plans to keep it that way.

Only He Can Offer Her a Dazzling Future . . .

Warrick Fitzhugh will do anything to protect his compatriots in the Foreign Office, including seduce Fallon, who he thinks can lead him to the deadliest crime lord in London. He knows he’s putting his life on the line . .

To Warrick’s shock, Fallon is not who he thinks she is, and the secrets she’s keeping are exactly what make her his heart’s desire . . .

You need to read this book for several reasons. The first one being the character of Fallon. She is outstanding!! I loved her strength and her independence. The second major reason being Shana Galen’s storytelling abilities. I love her stories and this one is no different!

If you Give a Rake a Ruby is available at Amazon

“Then I suggest you attend to your business, my lord. Good night.”

She turned and strolled toward the drawing room doors. She knew she would not reach them unmolested. She also knew she could ring for Titus.

But that would be too easy.

Kwirley was slower than she’d anticipated, and she had almost gained the towering mahogany doors before he caught her elbow and spun her around. “Not so fast—” he began.

Fallon kicked him in the belly, sending him sprawling backward. He knocked over a pedestal holding a jeweled lamp, and she had a moment’s worry because it was one of her favorites. But a quick glance reassured her the lamp was not broken.

The glance also revealed Kwirley was getting up. Blockhead. “Go home, my lord. I don’t want to hurt you.”

“Really?” He wiped his hands on his breeches. “Because I would like to hurt you. I don’t know who you think you are, but you’re going to pay for—”

She sidestepped him, spun, and booted him in his lower back. The blow set him off-balance, and she had a moment to grab a book and hurl it at him. Her aim was perfect, and the book’s spine hit him in the center of the forehead. “Ow, you little bitch!” He charged her, and Fallon shook her head. He wasn’t even thinking, simply acting blindly. She easily sidestepped him again, and he rammed into a settee, knocking it over. While he struggled to rise, Fallon dug her heel into the back of his neck and pressed him down.

“Had enough?” she asked. “Or would you prefer to go another round?” Because she was tired and wanted to go to bed, she ground her heel into his neck.

“Good.” Without lifting her heel, she reached for a little silver bell and rang it. The sound tinkled softly in the room and the drawing room doors opened immediately to reveal Titus.

Titus was close to seven feet tall and easily twenty-five stone. He had a thick head of bright red hair, shocking blue eyes, and a mouth full of crooked teeth. His hands were as big as puppies and his legs tree trunks. He did not walk so much as lumber, and Kwirley began protesting the moment Titus entered the room.

“There’s been some sort of mistake. I didn’t intend any disrespect.”

Fallon sighed. “Titus, I might have known you would be standing right outside.”

The giant shrugged, his shoulders small mountains. “I like to make sure there’s no trouble, my lady.”

Fallon had told him a hundred times she was no lady, but he insisted on referring to her as such anyway. Who was she to protest? It wasn’t as though anyone else was clamoring to call her a lady.

She pressed her foot into Kwirley’s neck for good measure then lifted it and stepped away. “Would you be so kind as to show Lord Kwirley out?”

Kwirley gave her a panicked look, and Fallon was sorely tempted to shrug helplessly. But at the last moment, she took pity on the man. “Titus, be nice. Don’t throw Lord Kwirley farther than the lamppost.”

She strode out of the drawing room, listening to Kwirley sputter and then plead for mercy. Titus was a gentle giant to anyone he loved. He was an ogre to anyone who but looked askance at someone he loved. But she couldn’t feel too sorry for Kwirley. Her father—she hoped he burned in hell—always said when you started feeling sorry for those who want to take advantage of you, then you’ve gone soft and deserve what you get.

Of course, he hadn’t said it quite that politely.

She lifted her skirts and climbed the stairs; nodded to Mary, one of the chamber maids; and blew out a long sigh. She was exhausted.

The past few days had been grueling. She’d been to one social event after another—balls, routs, masquerades, soirées, musicales. At this point, if she never saw another ballroom, theater, or pleasure garden, she would not mourn the loss. Normally she enjoyed the whirl of the Season, but without Juliette, everything seemed different.

Juliette, Lily, and Fallon were no longer The Three Diamonds. Now it was only Lily and Fallon, and they both missed Juliette terribly.

And, if Fallon was honest, she envied Juliette. Who wouldn’t envy a woman married to a wealthy duke who obviously adored her? Fallon had never really believed in love. Her father hadn’t loved her mother. He’d used her charms to run scams or make ends meet. And her mother hadn’t loved her father. She’d been a dim woman who needed a man to tell her what to do.

Fallon hadn’t loved either of her parents. She thought she’d fallen in love once, but the experience had taught her she’d been right all long.

There was no such thing as love.

Except…when she looked at Juliette and her Dangerous Duke, Fallon wondered.

She strode down the corridor toward her boudoir. Her booted feet made shushing sounds on the thick rug, and even though she was now quite used to living surrounded by opulence, she paused a moment to savor the plush rug, the paintings on the walls, the expensive upholstery on the Sheraton chair she’d just passed, and the fine silk of her gown.

She had no illusions as to how fortunate she was. Unlike the daughters of duchesses and earls Fallon often glimpsed at the theater or a ball, she had not grown up in such privileged circumstances. She had been lucky to have something to eat and shoes on her feet.

She did not take any of this for granted. It could all be taken away from her with the snap of a finger if anyone ever found out who she really was. There was a reason the Prince Regent had dubbed her the Marchioness of Mystery. No one—save Lady Sinclair, Juliette, and Lily—knew the truth about her. The ton was greatly diverted by conjecturing as to her true identity.

Some said she was the daughter of a maharaja. Little did they know, Fallon had been obliged to ask Lady Sinclair for the definition of maharaja. Other rumors hinted she was a gypsy queen or a princess from a secret kingdom. Fallon wished there was a tiny kernel of truth in but one of the rumors. Anything was better than the reality.

She opened the door of her boudoir and stepped inside. Strange. Usually Anne had the fire roaring and several candles lit. But the room was dark and cold. Fallon shivered, crossed to her bed, and pulled the cord to summon her lady’s maid. She reached out and felt the edge of her bed—the soft silk of her counterpane felt light and inviting as a cloud. Fallon rolled her neck, then sank down onto her bed.

She bolted upright and stifled a scream. There was a man in her bed.