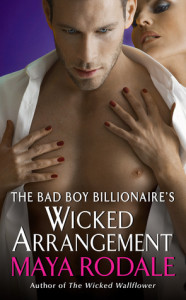 The first installment of a sexy, whirlwind romance about a modern day heroine writing historical romance novels based on her romantic misadventures with the bad boy billionaire.Jane Sparks has accidentally announced her engagement on Facebook—to the infamous Bad Boy Billionaire, Duke Austen. As soon as it’s discovered that Jane and Duke barely know each other (One hot kiss at a party does not a relationship make), she’ll be humiliated. And then Duke does something Jane never expected. He plays along with her charade.With his hard partying, playboy reputation jeopardizing a fifty million dollar investment deal, Duke realizes an engagement with the hot but oh-so-proper librarian could be just the thing to repair his reputation. This good girl tempts him to be very wicked…but just with her. It’s unprecedented. Inconceivable. Totally alluring.As the unlikely match of librarian and tech entrepreneur set out to convince the world—and the internet—that their love is real, something unexpected happens: they start falling for each other. But Jane is secretly writing a historical romance novel that could expose their carefully constructed romance…unless two perfect strangers are content to be perfectly scandalous together

Wicked Arrangement can be purchased at Amazon

Why do you need to read this book? This fast moving, totally delightful book is a must read! I can’t say enough great things about it.

@TechCrunch: Duke Austen’s startup, Project-TK , is rumored to be seeking $150m investment at a $1.2 billion valuation. Here’s why it might not happen.

Is the third time a charm for Silicon Alley party boy Duke Austen? After the spectacular flameouts of his first two startups, he’s on the verge of a major win—as long as investors can overlook his reputation for hard-partying and worries about him paying more attention to the hot supermodels instead of hot new products. Even if he gets the funds, Austen’s prospects of remaining in charge of the company he founded are slim, unless he cleans up his act. Read More . . .

“This.” I set down the damned invitation on the bar.

“What is this?” Roxanna asked, looking up from her iPhone. We often met here after work for drinks and supper before returning to our microscopic, claustrophobia-inducing Chelsea apartment.

“This is the invitation to my tenth annual high school reunion. In other words, I have just been invited to a party to showcase what an utter failure I am.”

“What are you talking about? You have ditched Bumblefuck, Pennsylvania, and your boring ex-boyfriend for the glamorous life of a single working girl in New York City.”

“I’m working as a library assistant, which is a step down from my previous job as head Librarian. I told everyone I was going to write a novel but I only have a word document that reads ‘Untitled Romance Novel’ and not much else. And I still love my ex-boyfriend, thank you very much. And he’s been dating. I saw it on Facebook. I have not been dating.”

“No, you’re just having hot and heavy hook-ups with strangers. Much better if you ask me,” Roxanna said with a grin. I had told her a little bit about what had happened at the party last night, leaving out the most embarrassing bits. Which is to say, I left out most of the story.

“One hook-up. Once. And while I was pawing at some random guy in the library like an adolescent, everyone else has gotten married and had children. Look—” I said, pulling up the list of my friends on Facebook, many of them from Milford High School. “Melissa, married. Has a baby. Rachel and Dan, married. Two children when some people don’t have any! Kate Abbott, who was totally horrible to me throughout high school is ‘seeing someone special.’ And it’s only a matter of time before Sam posts MARRIED! BABY! He keeps posting about dinners at all romantic places around town.”

“What, all three of them? You have to unsubscribe to his status updates,” Roxanna said dryly.

“I don’t know how,” I grumbled. “Technology mystifies me.”

“Here, let me see if I can do this on your phone,” Roxanna said. I handed it over without a second thought. “I’ll take care of this while you pine away for the days of card catalogues, horses and bayonets.”

“We were voted Most Likely to Live Happily Ever After,” I said glumly.

“Aww, should we go home and look through your yearbooks?” Roxanna asked, pushing her red hair over her shoulder.

She was tough as nails and just what I needed. In return, since she was a disaster at things like laundry, cooking, and paying bills, I helped make sure she had clean clothes, Wi-Fi, and didn’t subsist exclusively on bourbon and popcorn.

“No, it will only make me feel worse,” I said with a sigh. I knew because I had already looked through them. It was all the inscriptions that slayed me. Stay in touch. Don’t ever change.

Growing up, I had this idea of what my life would be like, and I did everything I could to make it happen. Good grades, good school, career in the library sciences, which would allow me some flexibility when Sam and I married and had kids.

We planned to get engaged after he finished his dissertation. Then he’d get a job as a professor at the nearby Montclair University.

We planned to have a house on Brook Street—I knew just the one—with great bookshelves and a yard for the kids. Maybe a couch from Pottery Barn. .

Sam had coldly explained that he wanted to see more of the world. Date other people. Be with someone more adventurous. Someone who didn’t have every detail of her life already pre-ordered.

“Ah, this will make you feel better,” Roxanna said when the bartender set down our drinks: a glass of chardonnay for me and bourbon on the rocks for her. “Cheers.”

“I just had this idea of what my life would be like by now,” I said as Roxanna messed around with my phone. “And so did everyone else. I had already planned my wedding on Pinterest. Now he’s squiring some girl around town to all the romantic spots while I’m working at the low level job I had in college and I’m hopelessly single.”

“Personally, I wouldn’t give a fuck what my loser high school classmates thought of me,” Roxanna said, sipping her bourbon and still messing around with my phone.

“I know. I’m seething with jealously.”

Truly, I kind of was.

“But since you clearly do care, why don’t you show up with a totally hot, successful date?”

I sighed and smiled. “It would make everyone jealous, wouldn’t it? No one would ask me if I missed my old job, why Sam and I broke up or how my novel writing is going. The problem is your plan requires me knowing a hot, successful guy. The only guy to ask me out since I moved here is José at the bodega.”

“Speaking of hot, successful guys, why do you have a friend request from DUKE AUSTEN?” Roxanna looked up at me, her blue eyes wide and her mouth open in shock.

“Hey, why do you still have my phone?”

“Jane! Is this the guy you hooked up with?” Roxanna held out my phone showing the Facebook profile of That Guy. All dark eyes, tousled hair, unshaven. Like a pirate or a highwayman or some rogue up to no good. Yeah, that was the guy.

“I think so. It was dark. I had a mask on,” I said. I figured he was just some charming but scruffy guy who was probably a struggling actor who tended bar at some hipster dive in Williamsburg. Totally un-dateable.

“Jane, this is DUKE AUSTEN,” she practically shrieked. Then she looked around as if someone might overhear this conversation. As if he were Somebody.

“He’s only the billionaire co-founder of Project-TK. See, you do know someone hot and successful. OMG do you ever!”

“Why? Cos he didn’t wear a suit and grey tie and wave around fat cigars and a bottle of 26-year Macallan? Welcome to the startup world, Jane. Where the billionaires look and act like the guys next door.”

“He caught me on my hands and knees,” I whispered, horrified. “And shushing people at a party.”

“And then he hooked up with you. I spent all day working on a story about him, in fact,” Roxanna said. She grinned wickedly before launching into everything I needed to know about him. “His company is seeking a series C-round of financing but everyone is freaking out because he’s a brilliant disaster and they’re afraid he’ll blow it like he did in his first two companies. Even if he gets the money, the investors might force him to step down. He can code and he can sell anyone on anything. But then he was always getting wasted and missing work or getting embroiled in all sorts of scandals with models. And there are rumors of drug use. He’s all kinds of bad news.”

“Why can’t I just find a nice guy with a steady job and benefits?”

“Oh, the romance. Oh, be still my beating heart,” Roxanna said dryly. “I have an idea.”

Roxanna grinned wickedly and started doing something on my phone. I reached for it, and she lunged away. “Hey, Jane, watch the drinks.”

“Roxanna, what are you doing?”

She held out the phone.

Everyone would see it. My mom, my dad, my sister. Everyone from Milford, my co-workers at the library, everyone I had ever known that had an Internet connection. Sam. He would see it.

And then all those people would see that it had been a joke, a prank or the desperate and wishful thinking of a lonely girl. Haven’t I had enough mortification?

I couldn’t do it again. I couldn’t answer all those people saying sweetly (or not so sweetly) “I thought you were with so-and-so. What happened?” It hurt too much to always say I don’t know when things kept going wrong.

Instead, I shrieked and lunged for the phone knocking over my class of chardonnay. It shattered, spilling all over the bar and dripped down into my nude patent pumps. My life was in shambles. And there was wine in my shoe.

“What have you done?” I gasped.
“I just got you a hot date for your high school reunion. You’re welcome.”

“Even better, right? I hope he gets you a giant diamond ring,” Roxanna said dreamily. “Although, he’s probably only a billionaire on paper—or he will be once Project-TK has their IPO. But don’t worry, I’m sure he’s got a few actual millions tucked away.”

“How do I undo this?” I frantically jabbed at the screen. It was so unsatisfying.

“I have no idea,” she said with a shrug. “Facebook settings are impossible to figure out.”

My phone dinged with an incoming text message from a number I didn’t recognize.

Jane Sparks: Who is this?